According to Ian Rapoport, the Buccaneers plan to give QB Tom Brady veteran rest days off from practice on Wednesday for the duration of the 2022 season. 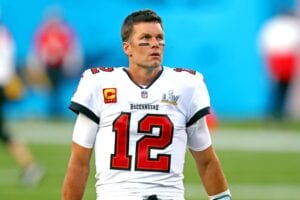 That’s not unusual for veteran players, but it’s the first time for Brady who would just take the occasional Thursday practice off the past two seasons.

Rapoport says the Bucs think Brady will be just fine without the snaps on Wednesdays, which will instead be valuable experience for backup QB Blaine Gabbert.

This is another sign that 2022 could potentially be Brady’s final year in the NFL, as people close to him expect but cannot confirm.

Rapoport also reported Brady’s 11-day hiatus during the middle of training camp was mostly spent on vacation with his family in the Bahamas, as he promised his wife after retiring he would vacation with them in August for the first time in decades.

Brady retired briefly earlier this offseason but came back after just 40 days.

Brady, 45, is a former sixth-round pick of the Patriots back in 2000. He was in the final year of his two-year, $41 million contract when he agreed to another two-year extension in 2017.

Brady has one more year on his current deal and would be an unrestricted free agent in 2023.

In 2021, Brady has appeared in one game for the Buccaneers and completed 18-27 pass attempts for 212 yards, one touchdown and one interception.

For his career, Brady has thrown for 84,250 yards, 624 touchdowns, 203 interceptions while completing 64.2 percent of his passes. He was a seven-time Super Bowl champion, a five-time Super Bowl MVP, a three-time MVP, 15-time Pro Bowler, and made six All-Pro teams in his career.

Brady is the all-time leader in touchdown passes and yards.