The Bucs and Vikings are among the teams showing interest in free-agent TE Kyle Rudolph, according to Jeremy Fowler. 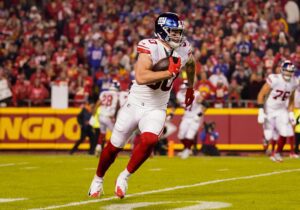 Fowler adds that multiple teams have had some level of interest in Rudolph and his situation should have some clarity before training camps open up.

It’s worth noting that Rudolph also worked out for the Broncos in April, but they never signed him to a contract.

Rudolph was set to make a base salary of $7.65 million for the 2021 season when the Vikings released him with a post-June 1 designation. He signed with the Giants on a two-year, $14 million deal but was ultimately released back in March.

In 2021, Rudolph appeared in 16 games for the Giants and caught 26 passes on 39 targets for 257 yards receiving and one touchdown.