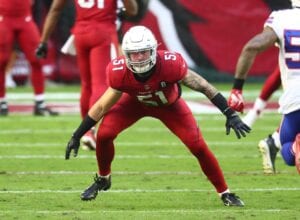 Vallejo, 27, is a former sixth-round pick by the Bills out of Boise State in the 2017 NFL Draft. He was in the second year of his four-year rookie contract when the Bills waived him at the start of the 2018 season.

After a brief stint with the Browns, Vallejo was claimed off of waivers by the Cardinals. He was later released coming out of the preseason before being claimed by Washington.

The Cardinals re-signed Vallejo to their practice squad during the 2019 season and he returned to Arizona on a two-year, $4.1 million contract last year.

In 2021, Tanner Vallejo appeared in 10 games for the Cardinals and recorded 11 tackles, a half sack and a pass defense.