Field Yates of ESPN reports that the Cardinals are hosting free agent CB Dre Kirkpatrick on a visit.

Arizona has taken a look at a few cornerbacks since Robert Alford was placed on injured reserve and have signed B.W. Webb to a contract. However, it appears as though they’re still open to adding even more depth at the position.

Kirkpatrick was set to make a base salary of $9.4 million for the 2020 season when the Bengals released him a few months ago.

In 2019, Kirkpatrick appeared in six games and recorded 33 tackles, one sack, a fumble recovery and four pass defenses. 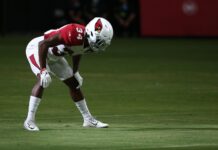