The Arizona Cardinals brought in four players for tryouts on Wednesday, according to Aaron Wilson.

Unfortunately, the Eagles elected to release Nelson in a move that cleared $1 million of available cap space. After a brief stint with the Falcons, Nelson signed a futures contract with the Buccaneers but was among their final roster cuts.

Nelson returned to the Broncos at the start of 2019, but his season was cut short when he tore his bicep during Week 8.

In 2019, Nelson appeared in seven games for the Broncos, recording ten tackles and no sacks.

The Dolphins declined to pick up Anthony’s fifth-year option and he played out the final year of his four-year, $7.731 million rookie contract.

Anthony then had brief stints with the Falcons and Jets before re-signing with the Saints. His second stint there didn’t last long as the team opted to release him a short time later.

In 2019, Anthony appeared in 12 games for the Saints and recorded one tackle. 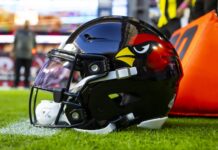