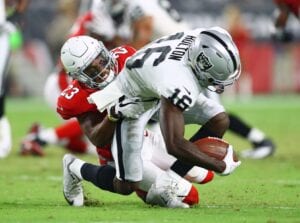 Shelton, 25, wound up signing on with the Cardinals as an undrafted free agent out of Wisconsin back in 2017. He was waived coming out of the preseason and later signed to the Bengals’ practice squad.

Cincinnati brought Shelton back on a futures contract in 2018 only to waive him with an injury settlement during the preseason. From there, he had a brief stint with the Eagles before returning to the Cardinals late last season and agreeing to a futures contract shortly thereafter.

During his college career at Wisconsin, Shelton recorded 129 tackles, nine interceptions, two forced fumbles and a recovery over the course of 53 games.

186,231FansLike
7,623FollowersFollow
276,505FollowersFollow
© NFLTradeRumors.co is an independent news source and has no affiliation with the National Football League (NFL), NFL.com, or any team(s).
wpDiscuz