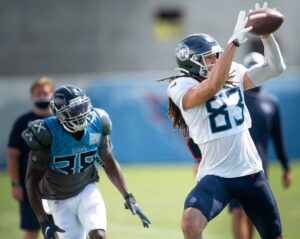 Hogan, 26, originally signed on with the Cardinals as an undrafted free agent out of Marian back in 2017. He was waived coming out of the preseason and later signed on to the Colts’ practice squad.

Indianapolis eventually promoted Hogan to their active roster, but he was waived with an injury designation coming out of the preseason and later reverted to their injured reserve list. The Colts eventually cut him with an injury settlement in 2018 and signed on with the Saints.

He caught on with the Titans in August of last year before joining the Colts’ practice squad shortly after. The Cardinals added him to their practice squad in December and signed him to a futures deal in January.

Arizona waived Hogan with an injury designation a few weeks ago and he reverted to injured reserve.

In 2019, Hogan appeared in eight games for the Saints and caught one pass for four yards receiving and no touchdowns.