According to Field Yates, the Cardinals hosted CB Deandre Baker and OLB Jeremiah Attaochu for a workout on Wednesday. 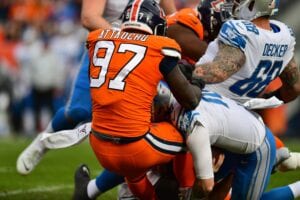 Arizona has been unhappy with its depth in the secondary, so it makes sense they’d take a look at Baker. He was just cut by the Chiefs.

Baker, 24, is a former first-round pick of the Giants out of Georgia back in 2019. He was in the second year of his four-year, $10,525,716 contract that included a $5,675,064 signing bonus when the Giants waived him during the summer following larceny charges.

It took until November for Baker to sign on to the Chiefs’ practice squad and he was eventually promoted for Week 15 before reverting to the taxi squad. He returned to the team on a futures deal for 2021 and again in 2022 as an exclusive rights free agent.

In 2021, Baker appeared eight games for the Chiefs and recorded 16 total tackles and a pass deflection.

Attaochu, 29, is a former second-round pick by the Chargers in the 2014 NFL Draft. He finished his four-year rookie contract before signing a one-year, $3 million contract with the 49ers.