According to Aaron Wilson, the Cardinals worked out three players on Tuesday including QB Carson Strong and TE Dominique Dafney. 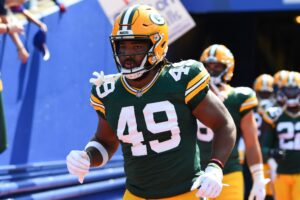 Dafney, 25, wound up going undrafted out of Indiana State back in April of 2020. He later signed a rookie contract with the Packers and was added to their practice squad before eventually being called up towards the end of the season.

Dafney managed to make the 53-man roster in 2021 but was cut loose coming out of the preseason and later reverted to injured reserve. Green Bay waived him with a settlement soon after. He signed on with the Broncos’ practice squad in September but was cut a month later.

In 2021, Dafney appeared in 10 games for the Packers and caught two of his four targets for 34 yards.

Strong, 23, finished his senior season at Nevada but opted to forego his final year of eligibility and enter this year’s draft. Unfortunately, Strong went undrafted.

The Eagles later signed Strong to a rookie contract before being among their final roster cuts.

During his four-year college career, Strong completed 68.1 percent of his pass attempts for 9,379 yards (7.5 YPA), 74 touchdowns, and 19 interceptions in 32 career games.