Joe Reedy of the Cincinnati Enquirer writes that Cedric Benson decision to join Bengals players for their player-run workouts is a good indicator that he strongly consider re-signing with the team once free agency is open.

“Benson wants to come back and the Bengals want him back, which means there’s a good chance it will happen. The exception would be if another team gets really hot on the free agent tailback and offers a huge contract,” writes Walker.

New offensive coordinator, Jay Gruden, has already said that they plan on shifting the focus back to the running game for the upcoming season which would likely make Benson their No. 1 offseason priority. Benson will be 28 at the start of the 2011 season and he’s seen his carries increase dramatically over the last two seasons. Re-signing him for the next few seasons makes sense because it will buy them some time to develop a future running back. 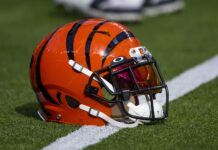