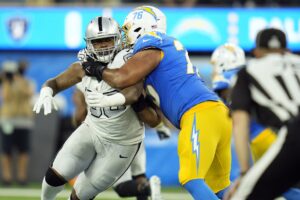 Aboushi, 30, is a former fifth-round pick of the Jets back in 2013. He spent two years in New York before he was cut loose and later claimed off waivers by the Texans a few weeks into the 2015 season.

Aboushi later had stints with the Seahawks, Raiders and Cardinals before signing a one-year contract with the Lions 2019. Detroit brought him back on a new contract in 2020.

The Chargers signed Aboushi to a one-year, $1.75 million contract this past March.

In 2021, Aboushi has appeared five games for the Chargers, making five starts for them at guard.