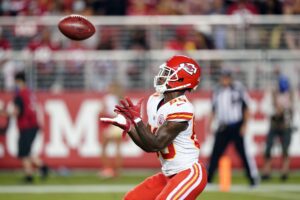 Ffrench, 23, wound up going undrafted out of Pittsburgh back in 2020. He later signed a rookie contract with the Chiefs and was later added to their practice squad at the start of last season.

Kansas City brought Ffrench back on a futures contract before once again waiving him coming out of the preseason. He had a brief stint on their practice squad.

Ffrench has yet to appear in an NFL game.