Ian Rapoport of NFL Media reports that the Chiefs are activating C Daniel Kilgore from the COVID-19 list on Saturday ahead of Super Bowl LV. 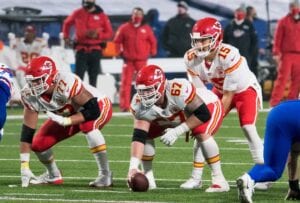 Kilgore spent the week on the COVID-19 list due to being a high-risk close contact with a barber. However, he has tested negative all week.

Kilgore, 33, is a former fifth-round pick of the 49ers back in 2011. He spent the first seven years of his NFL career in San Francisco and was set to enter unrestricted free agency when he signed a three-year extension worth nearly $12 million back in 2018.

The 49ers later traded Kilgore to the Dolphins a month after signing him to the deal in order to move up a few spots in the seventh round. The Dolphins later declined Kilgore’s contract option and he became a free agent in 2020.

Kilgore eventually signed on with the Chiefs in August of last year.

In 2020, Kilgore appeared in seven games for the Chiefs and make four starts for them.