Chiefs LB Willie Gay has been suspended for the next four games of the NFL regular season for violating the personal conduct policy. He’s eligible to return to the active roster on October 17. 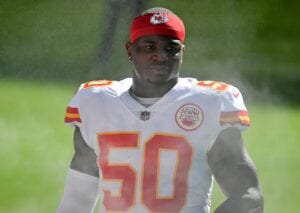 This stems from Gay’s January arrest on misdemeanor property damage.

Gay claimed he was visiting his son’s house and argued with the boy’s mother. He broke a vacuum during the argument and was charged with destruction of property of less than $1,000.

He suffered a torn meniscus in the AFC Championship game and finished the playoffs on the injured reserve. He returned from the reserve list in October.

In 2022, Gay has appeared in two games for the Chiefs and recorded 16 tackles and two pass deflections.