Chiefs owner Clark Hunt said tells 105.3 The Fan in Dallas that they plan to open extension talks with QB Patrick Mahomes this summer. 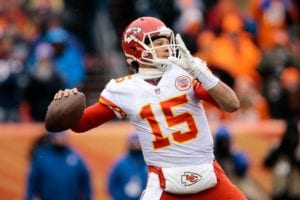 “The negotiations are something we’ll be getting into this summer,” Hunt said. “But what he has said and what we’ve said, both sides, is he wants to be a Kansas City Chief for life, and that’s our mentality as well. We want him to play his entire career in Kansas City, and that’s what we’re going to be shooting for.”

Hunt praised Mahomes’ leadership, despite being a young player and explained that they knew early into his first year in Kansas City that he was a special talent.

“In terms of special qualities, the thing that really struck me in 2018, the first year that he became a full-time starter for us, was his leadership ability,” Hunt said. “We knew he had these special physical gifts. We had seen him on the practice field. We’d seen the no-look throws. We had seen the 70-yard bombs, all that stuff. I’m not sure we had seen the left-handed throw but maybe. But anyhow, we knew we had that. But the pleasant surprise was what a great leader he was at age 23. An NFL locker room is a very difficult place to come into as a young player and lead, but it was very evident that the entire team was looking up to him in his first year as a starter, and of course, that carried over into this past season.

“He has a tremendous amount of humility going back to what I said about leadership qualities. So he’s very humble on one hand and very competitive on the other and his teammates all respect him and want to play for him and with him.”

Reports have said that Mahomes could end up becoming the first NFL player to earn $40 million per year once his extension is completed.

The Chiefs officially picked up Mahomes’ fifth-year option last month that is guaranteed for injury only and won’t prevent them from negotiating a contract extension in the coming months. It’s projected to cost them $24,837,000 for the 2021 season.

Mahomes, 24, is a former first-round pick of the Chiefs back in 2017. He is currently in the final year of a four-year, $16.4 million contract which is fully guaranteed and included a $10 million signing bonus.

In 2019, Mahomes appeared in 14 games for the Chiefs and completed 65.9 percent of his passes for 4,031 yards to go along with 26 touchdowns and five interceptions. He has also rushed for 218 yards and two touchdowns.

We’ll have more regarding a new deal for Mahomes as the news is available.

186,206FansLike
7,623FollowersFollow
279,841FollowersFollow
© NFLTradeRumors.co is an independent news source and has no affiliation with the National Football League (NFL), NFL.com, or any team(s).
wpDiscuz