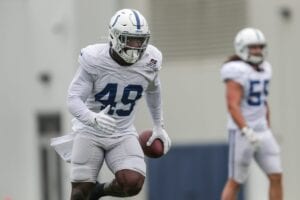 The Colts placed Adams on the list last week, so this was a short stay for him.

Adams, 24, is a former seventh-round pick by the Colts in the 2018 NFL Draft out of Houston. He’s in the third year of his four-year, $2.6 million rookie contract.

In 2019, Adams appeared in all 16 games and recorded 10 total tackles, one tackle for loss, and no sacks.