According to Tom Pelissero, the Colts are waiving K Rodrigo Blankenship on Tuesday. 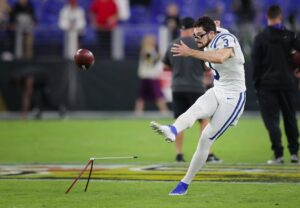 Blankenship missed what would have been a game-winning field goal on Sunday against the Texans and sent two other kickoffs out of bounds.

Pelissero adds the Colts will likely sign one or two kickers to their practice squad as replacements.

Blankenship, 25, signs with the Colts as an undrafted free agent out of Georgia in 2020 after receiving some buzz as a potential draft pick even as a specialist.

Blankenship won the Lou Groza award in 2019 given to college football’s best kicker. He also was a Georgia fan favorite because of the unorthodox glasses.

In 2022, Blankenship has made two out of three field goal attempts and both extra points.