According to the Athletic’s Ben Standig, the Commanders have received recent trade inquiries for DT Daron Payne. 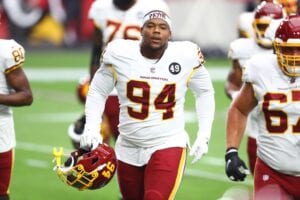 Washington gauged the trade market for Payne before the draft in April, but ended up keeping him. Standig says Washington has rebuffed the recent interest in Payne.

He previously reported Washington is not expected to offer Payne a contract extension. The Commanders gave fellow DT Jonathan Allen a deal worth $18 million a year last summer and have to think about deals on the horizon for DEs Montez Sweat and Chase Young.

Payne is playing out the 2022 season in a contract year on his fifth-year option worth $8.53 million.

Payne, 25, is the former 13th overall pick in the 2018 NFL Draft out of Alabama. He signed a four-year $14.418 million dollar rookie contract with the Washington Football Team that included an $8.566 million dollar signing bonus.

Washington exercised his fifth-year option for the 2022 season which is worth $8.53 million.

In 2021, Payne appeared in all 17 games for Washington and recorded 61 total tackles, six tackles for loss, 4.5 sacks and one fumble recovery. Pro Football Focus had him rated as the No. 40 interior defender out of 109 qualifying players.

We’ll have more on the Commanders and Payne as the news is available.