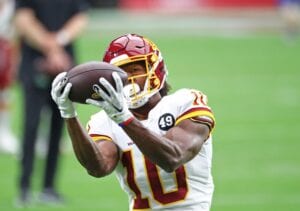 Gandy-Golden was on the roster bubble this year and already was trying to convert from wide receiver to tight end to secure a spot.

Finlay notes he’ll be going back to school. He majored in graphic design at Liberty University.

Gandy-Golden, 24, was drafted by Washington in the fourth round of the 2020 draft. He signed a four-year, $3.8 million contract with Washington.

However, Washington released Gandy-Golden coming out of the preseason in the second year of that deal and later re-signed him to their practice squad. He was later promoted back to the active roster.

For his career, Gandy-Golden appeared in 10 games for the Commanders in two seasons and caught one pass for three yards. He also rushed once for 22 yards.