The Dallas Cowboys announced that they are elevating QB Will Grier from the practice squad for Week 4. 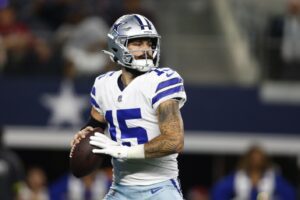 The Cowboys claimed Grier and he spent the rest of the season on their roster.

In 2019, Grier started two games and completed 28 of 52 pass attempts for 228 yards, no touchdowns, and four interceptions. He added seven rush attempts for 22 yards.