Michael Gehken reports that the Cowboys fear TE Blake Jarwin suffered a torn ACL during Sunday’s game against the Rams. 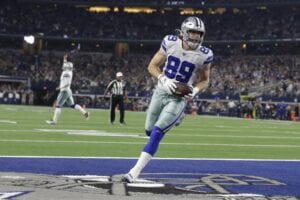 The team will have Jarwin undergo an MRI to reveal the full extent of the injury, but Gehlken says the belief is that he’s out for the season.

This was a non-contact injury for Jarwin, who stopped while running a route before grabbing at the back of his knee.

The Cowboys have Dalton Schultz and Blake Bell on their roster at tight end.

Jarwin, 26, signed on with the Cowboys as an undrafted free agent out of Oklahoma State back in 2017. He joined their practice squad coming out of the preseason his rookie year and was promoted to their active roster shortly after.

The Cowboys signed Jarwin to a three-year, $24.25 million extension this past March that included $9.25 million guaranteed.

We’ll have more regarding Jarwin as the news is available.

186,463FansLike
7,623FollowersFollow
275,858FollowersFollow
© NFLTradeRumors.co is an independent news source and has no affiliation with the National Football League (NFL), NFL.com, or any team(s).
wpDiscuz