According to Jane Slater, the Cowboys have received trade inquiries from other teams regarding LB Leighton Vander Esch. 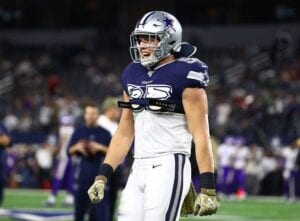 However, she says Dallas is not interested in moving the young linebacker right now and he remains a part of their plans in 2021 and beyond.

The Cowboys declined Vander Esch’s fifth-year option last month and made a number of prominent additions to the linebacking corps, so it was logical for teams to wonder if Dallas would be willing to part with Vander Esch.

2021 is the final year of Vander Esch’s deal but Slater previously reported Dallas still was open to signing him to a contract extension despite declining his fifth-year option.

Vander Esch, 25, was selected by the Cowboys with the 19th overall pick in the 2018 NFL Draft. He’s entering the fourth year of a four-year, $11.847 million dollar rookie contract that included a $6.696 million dollar signing bonus.

Vander Esch will be an unrestricted free agent in 2022.

In 2020, Vander Esch appeared in 10 games for the Cowboys and accrued 60 total tackles, one tackle for loss, one sack, and one forced fumble. Pro Football Focus had him rated as the No. 53 linebacker out of 83 qualifying players.

We’ll have more on Vander Esch as the news is available.