Tom Pelissero of NFL Media reports that the Cowboys plan to start QB Garrett Gilbert on Sunday against the Steelers. 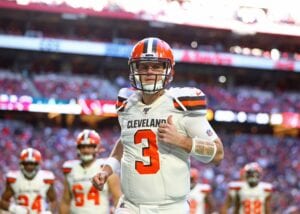 Pelissero mentions that Gilbert has taken the majority of reps this week in practice.

Cooper Rush was also in the mix to start this week, but he’s expected to serve as the team’s backup.

Andy Dalton has been in the concussion protocol and then tested positive for COVID-19. However, he could be back with the team in Week 10.

Gilbert, 29, is a former sixth-round pick of the Rams back in 2014. However, he was waived at the start of the season and was later signed to the Rams’ practice squad.

Gilbert had brief stints with the Patriots, Lions, and Raiders before signing on to the Panthers practice squad in 2017. He was on and off of the unit throughout 2018.

In 2019, Gilbert appeared in five games for the Browns and had three pass attempts.