Dea Spanos Berberian, who is a co-owner of the Chargers and the sister of Dean Spanos, has asked a court to force the sale of the franchise, citing serious debt issues. 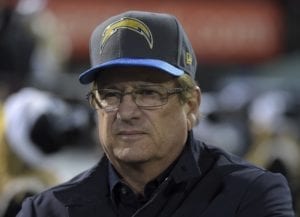 “Dean refuses to consider a sale of the Trust’s Interest of the Chargers, insisting that the Co-Trustees continue to borrow more and more, and to force the charities and beneficiaries to wait for years and to ‘hope’ while Dean speculates further on a football team,” Berberian’s court filing says, according to the Los Angeles Times. “Dean has failed to present any plan to address the Trust’s bleak financial picture, because there is no other plan than the one urged by [Berberian]. Dean simply refuses to discuss it. . . . His plan is hope.”

Berberian owns 15 percent of the franchise, which happens to be the same percentage as Dean. The Spanos family trust owns 36 percent of the team with the other 30 percent being split by their other two siblings.

According to the report, Berberian alleges that the family trust is $353 million in debt.

Berberian is being represented by attorney, Adam Streisand, who also represented Steve Ballmer in his purchase of the Clippers and Jeanie Buss in her legal fight to become the controlling owner of the Lakers.

The petition also notes that there are reports that Amazon founder Jeff Bezos is interested in becoming an NFL owner and said “the Chargers could be a perfect opportunity.”

The Chargers issued the following statement to Nathan Fenno regarding Berberian’s petition to sell the team:

“For the three of us, the Chargers is one of our family’s most important legacies, just as it was for our parents. Unfortunately, our sister Dea seems to have a different and misguided personal agenda.”

There have been financial concerns related to the Spanos family for several years now and they played into the team agreeing to join the Rams in Los Angeles as a tenant of Sofi Stadium.

Beyond that, there has been some speculation about the future of the Chargers and whether they will remain in Los Angeles long term. However, Dean Spanos has pushed back hard on this speculation.

We’ll have more regarding the Chargers as the news is available.