Ian Rapoport of NFL Media reports that the Raiders plan to conduct a “full and thorough” head-coaching search after their season is over. 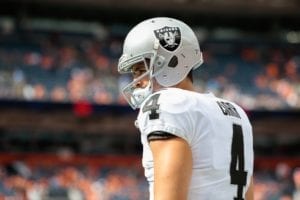 According to Rapoport, Raiders QB Derek Carr’s future will be tied to whomever Las Vegas hires as their next head coach. Rapoport explains that the Raiders and Carr have a “mutual decision” to make this offseason and sources have told him that the next Raiders’ head coach will be a factor in this.

Carr has said that his preference is to remain with the Raiders. However, he will be entering the final year of his contract.

Beyond that, Rapoport mentions that Raiders GM Mike Mayock’s future with the team will also be evaluated after the season and whether he’s back in Las Vegas or not could impact Carr’s future as well.

Rapoport would expect there to be several suitors for Carr should end up being available this offseason with the Saints, Texans and Colts being some teams that could make sense for him.

Carr, 30, is a former second-round pick of the Raiders back in 2014. He was in the final year of his contract when the Raiders signed him to a five-year, $125 million extension that included $70 million guaranteed in 2017.

Carr stands to make base salaries of $19.52 million and $19.77 million over the final two years of the agreement. He will be an unrestricted free agent in 2023.