The Miami Dolphins signed P Matt Szymanski on Tuesday, according to the NFL transactions release.

Szymanski, 25, signed a reserve/future contract with the Chiefs a few months ago, but he was later waived at the end of March.

He’ll have to compete for a roster spot with Brandon Fields this offseason.

Last year, Fields was rated as the No. 12 punter in the league, according to Pro Football Focus. 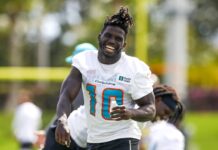