Stephen Holder reports that the Eagles are hiring former Colts OC Marcus Brady as a consultant after he was fired by Indianapolis amid coaching changes earlier this month. 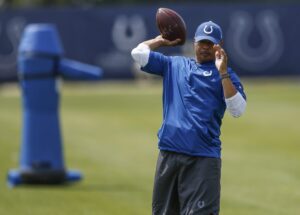 Brady, 43, had a seven-year career as a quarterback in the Canadian Football League after playing collegiately at Cal State Northridge. He went into coaching after retiring in 2009 and spent another nine years coaching in the CFL, including six as an offensive coordinator.

The Colts hired Brady as an assistant QB coach in 2018. He was promoted to the main role in 2019.

Brady was promoted to offensive coordinator back in January of 2021, replacing Nick Sirianni who accepted the Eagles’ head coaching position.

The Colts were 3-4-1 this season at the time of Brady’s firing, ranking ninth in passing and 29th overall in rushing.

We will have more news on Brady as it becomes available.