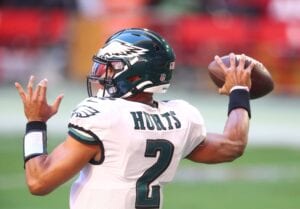 “Nobody else got reps with the ones,” Sirianni said via Jeff McLane. “Jalen is our starter.”

That leaves veteran Joe Flacco as the backup and recently-acquired Gardner Minshew will work as the No. 3 and on the scout team.

It’s worth noting that Eagles owner Jeffrey Lurie apparently wanted the team to prioritize putting pieces in place around Hurts to help him be successful over adding competition this offseason.