According to Jason La Canfora, the Eagles are taking an aggressive approach to the trade deadline, with GM Howie Roseman sending signals to several teams that he’s interested in making a deal. 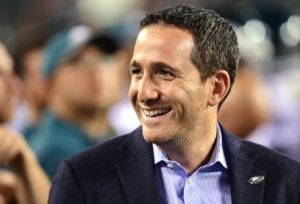 Philadelphia has had a slow start to the season but is still alive in a weak NFC East at 1-3-1. The Eagles are half a game back of the Cowboys, who are 2-3 but just lost starting QB Dak Prescott for the year.

That could prompt them to make a move to upgrade at linebacker, offensive line, receiver or elsewhere if the opportunity presents itself.

“Howie is on the prowl already,” a rival GM told La Canfora. “He’s looking for action. If there is a trade to be made he’ll do it. Bringing in a free agent from the outside is tougher now and more risky with COVID, and he loves to make trades anyway. I’ll bet you anything he gets something done before the deadline.”

Roseman is noted for his aggressiveness and willingness to make trades, and La Canfora writes he’s zeroed in on linebacker in particular. The Eagles linebackers have been victimized in coverage in recent weeks.

We’ll have more on the Eagles ahead of the trade deadline as the news is available.

186,384FansLike
7,623FollowersFollow
276,023FollowersFollow
© NFLTradeRumors.co is an independent news source and has no affiliation with the National Football League (NFL), NFL.com, or any team(s).
wpDiscuz