According to Ian Rapoport, Eagles QB Gardner Minshew has already drawn trade interest from other teams this season and is expected to get more following his strong performance in last week’s win. 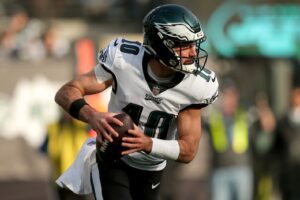 Rapoport says the Panthers reached out to the Eagles during the season to gauge the price for Minshew. Trade negotiations never progressed much past that, however.

Following Minshew’s performance in a win against the Jets last week, though, in which he completed 20-25 passes for 242 yards and two touchdowns, Rapoport notes Minshew is expected to receive more interest.

He adds most teams view Minshew as a potential bridge starter with upside and at worst a high-level backup. That could net the Eagles a mid-round pick, which would be a profit on the sixth-round pick they sent to the Jaguars to acquire him.

As far as Minshew’s status in Philadelphia going forward, Rapoport writes there is no quarterback controversy and Jalen Hurts is expected to return to the starting lineup in Week 15.

The Jaguars traded Minshew to the Eagles coming out of the preseason in exchange for a sixth-round pick.

In 2020, Minshew appeared in nine games for the Jaguars and completed 66.1 percent of his passes for 2,259 yards, 16 touchdowns and five interceptions. He also rushed for 153 yards and a touchdown.