The Giants announced that former QB Eli Manning will return to the team in a role with the organization.

Manning will have a role working with business operations and fan engagement.

Eli Manning is back home! @EliManning has rejoined the org in a business ops & fan engagement role. Plus, we've set the date for jersey retirement and ring of honor!

New York also announced Manning will be inducted into the team’s Ring of Honor and have his No. 10 jersey retired in a ceremony on September 16 when the Giants are hosting the Falcons.

“For 16 seasons, Eli represented and defined what it meant to be a Giant and we are excited for him to join the business side of our front office,” said John Mara, the Giants’ president and chief executive officer. “Eli is one of the most beloved players in Giants history. We had a mutual interest in him returning to the organization and we’re thrilled to welcome him back.”

“We are proud Eli was our quarterback for so many years and now look forward to his next chapter as a Giant,” said Steve Tisch, Giants chairman and executive vice president. “Eli is the ultimate team player and will be a huge addition to the organization as we continue to elevate and strengthen our business operation.”

Manning has been out of football since retiring in 2020.

“After not being able to come back in the facility for a full year, to finally see my former teammates and the individuals I’ve spent the past 16 years with – like the trainers and equipment guys, video, scouting, management, owners – it’s incredibly exciting to be back,” Manning said. “Staying involved with this organization is very important to me. I love the organization, love the Giants and the fans, and so I want to do anything possible to help them out and be a part of it.”

Manning, 40, is a former first-round pick of the Chargers back in 2004. He was traded to the Giants during the draft and spent all 14 years of his career in New York.

Manning played out the final year of his five-year, $101.5 million contract that included $65 million guaranteed and made a base salary of $11.5 million for the 2019 season. He was in line to be an unrestricted free agent in 2020 when he retired.

For his career, Manning completed 60.3 percent of his passes for 57,023 yards, 366 touchdowns, and 244 interceptions over the course of 16 seasons and 236 games. Manning was a two-time Super Bowl MVP and a four-time Pro Bowl selection. 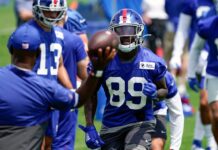