The Atlanta Falcons announced Saturday that they’ve released LB Barkevious Mingo on following the news of his recent arrest for “indecency with a child, sexual contact.” 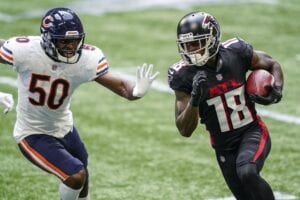 Here’s a statement from the team:

“After being made aware today of allegations involving Barkevious Mingo and gathering information on the matter, the Atlanta Falcons have terminated his contract.”

Mingo is facing a second-degree felony that could carry a 20-year prison sentence if convicted. He posted $25,000 bond and was released.

Lukas Garcia, the attorney for Mingo, called the indecency with a child charge “completely baseless” and said he expects his client to be fully exonerated.

Jon Wertheim of SI.com later reported that the charges against Mingo stem from an alleged incident that took place over the July 4th weekend of 2019 that was later brought to the attention of the Arlington PD this past January.

Wertheim obtained documents related to a search warrant filed by Arlington PD that show Mingo invited a teenage family member and a boy’s friend to spend a day with him.

Mingo took the teenage boys to Six Flags Over Texas and K1 Speed before having dinner at a popular local steakhouse. Beyond that, Mingo treated them to a shopping spree.

The boys returned to the local hotel Mingo was staying at on July 4, 2019.

The documents obtained by Wertheim say that the boy fell asleep before waking up and noticing Mingo in bed with him. The plan was for Mingo to sleep in a separate room, but he was later woken by Mingo.

“The victim was then woken by [Mingo] pulling at his underwear. This occurred for a few minutes until the suspect got more and aggressive and pulled the victim’s underwear down to his shins. The victim advised that when this was occurring, he was scared and pretended to be asleep. [Mingo] put a lotion on that made the victim’s skin burn and … rubbed his penis up and down, in between the victim’s butt crack.”

The boy’s mother made a complaint to police this past January. Police applied for a search warrant to obtain Nike’s sales records from July 4, 2019, pertaining to three orders made by Mingo, and Nike has complied with the order.

Seattle elected to trade Mingo to the Texans as part of the Jadeveon Clowney deal. He spent the 2020 season with the Bears before signing on with the Falcons this past March.