TMZ Sports is reporting that free agent DE Aldon Smith was arrested on Monday and is facing a felony charge of DUI causing injury. 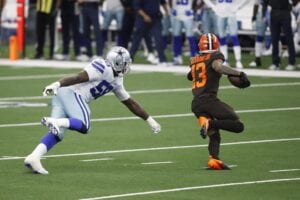 As of now, the details regarding Smith’s arrest are unclear, but records show that he was booked into a Northern California jail at 7:38 PM on Monday night, according to TMZ.

The records show that Smith has a hearing scheduled for Wednesday.

Back in April, Smith turned himself in to police and was booked on a second-degree battery charge. He was later released on $25,000 bond.

Smith allegedly assaulted a man outside a business two days after he signed on with the Seahawks. Deputies responded to a call for medical assistance and arrived to find a male victim who claimed he was assaulted by an acquaintance of his.

Smith, 32, is a former first-round pick of the 49ers back in 2010. He was cut loose by the 49ers shortly after a DUI incident in 2015, even though San Francisco picked up his fifth-year option.

Smith later signed a one-year deal with the Raiders that was worth up to $8 million, which was largely incentive-based. The Raiders elected to re-sign Smith to a two-year, $11.5 million contract in 2016.

However, the Raiders placed Smith on the reserve/suspended list before cutting him loose in 2018. The Cowboys signed him to a one-year contract worth $2 million and includes another $2 million in incentives.

From there, Smith joined the Seahawks on another one-year contract this past April, but was released during the preseason.

In 2020, Smith appeared in all 16 games for the Cowboys and recorded 48 tackles, five sacks, two fumble recoveries including one returned for a touchdown and two passes defended.