The New York Giants announced Sunday that they’ve placed DL Leonard Williams on the non-football injury and WR/KR Da’Mari Scott has opted out of the 2020 season. 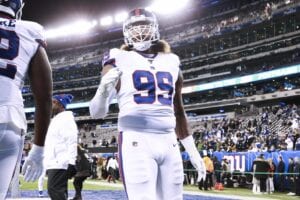 Williams made a base salary of $14.2 million for the 2019 season before the Giants used their franchise tag on him this offseason. The franchise tag will cost the Giants between $16.126-$17.788 million fully guaranteed, depending on whether he’s considered a defensive end or a defensive tackle.

In 2019, Williams appeared in 15 games for the Giants and Jets and recorded 46 tackles, 0.5 sacks, one forced fumble and three pass defenses. He was rated by Pro Football Focus as the No. 36 interior defender out of 114 qualifying players.