Adam Schefter reports that the Giants are releasing WR Golden Tate on Wednesday. 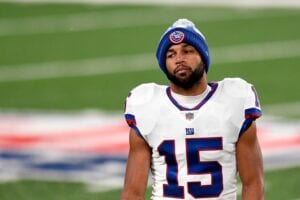 Tate, 32, is a former second-round pick of the Seahawks back in 2010. He played out his rookie contract in Seattle before signing a five-year, $31 million contract that included $13.25 million with the Lions.

Tate was traded to the Eagles and made a base salary of $7 million for the 2018 season. The Giants later signed him to a four-year, $37.5 million contract that includes $23 million fully guaranteed.

He was entering the third year of his contract and was set to earn base salaries of $8.475 million and $5.975 million over the next two years.

According to OverTheCap.com, releasing Tate frees up $6.147 million while creating $4.705 million in dead money contract.

Mayo, 27, is a former fifth-round pick of the Panthers back in 2015. He played out the final year of his four-year rookie contract with the Panthers and signed with the 49ers in free agency.

San Francisco released Mayo during final roster cuts coming out of the 2019 preseason and he later signed on with the Giants. He signed a three-year, $8.4 million extension last offseason through 2022.

According to OverTheCap.com, releasing Mayo frees up $2.3 million in cap space.

In 2020, Mayo appeared in 11 games and recorded 26 total tackles, two tackles for loss, and one forced fumble.