According to Field Yates, the Giants have restructured C Nick Gates‘ deal to give them a little extra cap space to operate this season. 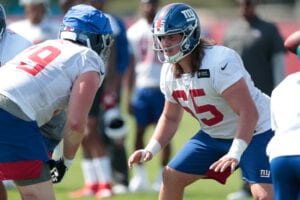 Gates is currently on injured reserve with a fractured leg suffered in Week 2.

Gates, 25, wound up signing on with the Giants as an undrafted free agent out of Nebraska back in 2018. He later agreed to a three-year, $1.71 million contract with New York and has managed to make the 53-man roster in each of his first two seasons.

He later signed a two-year, $6.825 million extension with New York in August of 2020 and started all 16 games for the Giants at center.

In 2020, Gates appeared in and started two games for the Giants at guard.