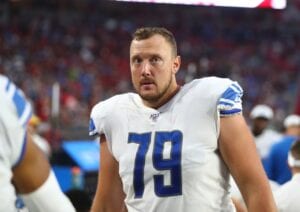 Wiggins recently tried out for the Giants.

Wiggins, 31, wound up signing on with the 49ers as an undrafted free agent out of Fresno State back in 2011. He lasted just a few months with the team before he was signed to the Ravens’ practice squad at the start of the 2011 season.

Wiggins would later return to San Francisco during his rookie year before ending up with the Chargers at the start of the 2013 season. He has spent the past five years with the Chargers before joining the Lions for the 2018 season.

The Lions signed him to a two-year contract in August of 2018 and re-signed to a one-year deal this offseason. However, he’s been on and off of their roster this season.

In 2020, Wiggins has appeared in four games for the Lions.