The New York Giants announced that they have waived WR Da’Mari Scott and DB Shakial Taylor on Friday, per Dan Salomone of the team’s official site. 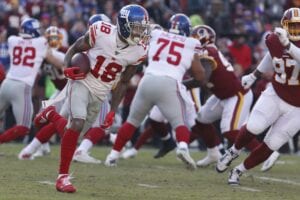 Scott, 25, wound up signing on with the Browns as an undrafted free agent out of Fresno State back in May of 2018. He agreed to a three-year, $1.71 million contract with the Browns, but was waived coming out of the preseason.

Scott had brief stints with the Browns and Bills before being claimed by the Giants in 2019. New York waived him coming out of the preseason and later re-signed him to their practice squad.

They eventually promoted him to the active roster but elected to opt-out of the 2020 season.

In 2019, Scott appeared in five games and recorded two receptions for 22 yards and no touchdowns, to go along with five rushing yards and 32 yards as a punt return specialist.

During his college career at Fresno State, Scott caught 91 passes for 1,163 yards receiving and five touchdowns over the course of 42 games.