Mike Florio of Pro Football Talk reports that the Raiders are believed to be preparing to make a run at hiring Patriots offensive coordinator Josh McDaniels as their next head coach. 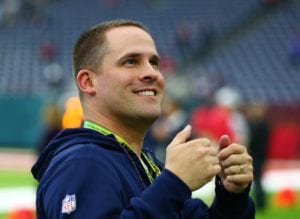 Florio mentions that the Raiders’ interest in Patriots executive Dave Ziegler for their GM job is “strong circumstantial evidence” to support the talk of McDaniels being the Raiders’ target.

According to Florio, McDaniels is believed to want full control over the football operation, which could complicate the team hiring Ziegler.

McDaniels, 45, began his NFL coaching career with the Patriots as a personnel assistant back in 2001. He worked his way up to offensive coordinator in New England before he departed for the Broncos head-coaching job in 2009.

Unfortunately, things didn’t go very well for McDaniels with the Broncos and he was fired during his second year with the team. After a brief stint with the Rams as their offensive coordinator and quarterbacks coach, McDaniels returned to the Patriots and has been running their offense ever since.

McDaniels agreed to become the head coach of the Colts a few years ago before later backing out of the agreement to remain in New England. He also drew interest last in 2020 from the Browns, Panthers, and Giants, but elected to stay with the Patriots.