Mike Garafolo of NFL Media reports that free agent C J.C. Tretter is among the options for the Buccaneers, who could be without Ryan Jensen for an extended period of time due to a potentially serious knee injury. 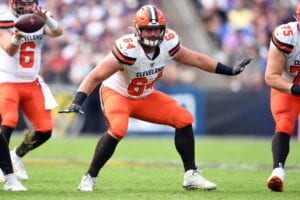 According to Garafolo, Ali Marpet, who previously played some center and retired this offseason, has and has shown no signs of returning to the NFL.

Tretter, 31, is a former fourth-round pick of the Packers out of Cornell back in 2013. He played out the final year of his rookie contract before agreeing to a three-year, $16.75 million contract that included $6.5 million guaranteed with the Browns in 2017.

Tretter then signed a three-year, $32.5 million extension that included more than $23 million guaranteed. He was set to make a base salary of $7.9 million in the final year of the deal when the Browns released him in March.

In 2021, Tretter appeared in 16 games and made 16 starts for the Browns at center. Pro Football Focus has him rated as the No. 6 overall center out of 39 qualifying players.