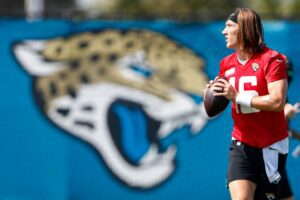 This has been expected since the moment the Jaguars locked up the No. 1 overall pick that was used on Lawrence.

However, Jaguars QB Gardner Minshew had put up a game fight during camp and preseason and the coaching staff had held off announcing a starter until now.

Minshew’s name has come up as a potential trade candidate since the Jaguars selected Lawrence No. 1 overall, so it will be interesting to see if anything develops on that front.

Lawrence, 21, was a three-year starter at Clemson and a first-team All-American as a junior and ACC offensive player of the year in his final season. The Jaguars selected him with the No. 1 overall pick in the draft.