According to Mark Long of the AP, a person familiar with Jaguars HC Urban Meyer‘s thinking says the coach does not plan to make a return to college football. ESPN’s Michael DiRocco also reports the same thing. 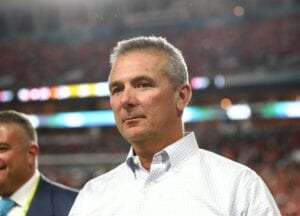 The college coaching cycle is in full swing, and a number of high-profile jobs have opened up, including Notre Dame. Meyer coached at the school early in his career and called it a dream job at one point, leading to natural speculation.

However, this appears to be his attempt to nip that in the bud. Meyer was also linked to the USC vacancy earlier this year but shot it down at the time.

Things have stabilized somewhat for the Jaguars and Meyer since a turbulent start to the season. Still, the transition to the pros from college has not been smooth for Meyer so far.

So far, Meyer has a 2-9 record with the Jaguars.