The Jacksonville Jaguars officially claimed LB Chapelle Russell off waivers from the Buccaneers on Monday. 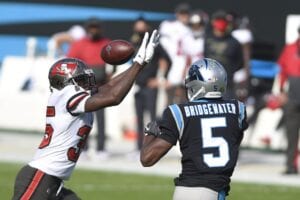 Russell, 23, is a former seventh-round pick of the Buccaneers last April. He signed a four-year, $3.37 million contract with the Bucs, but was waived coming out of training camp.

The Buccaneers later signed Russell to their practice squad before eventually promoting him to their active roster. The Buccaneers cut him loose last week.

In 2020, Russell appeared in 11 games for the Buccaneers, but did not record a statistic.