We have named Nick Sorensen our special teams coordinator.#DUUUVAL pic.twitter.com/2s14ENnZnr

The Jaguars also interviewed former Lions special teams coordinator Brayden Coombs for the position, but it seemed like an odd fit, considering that new OC Darrell Bevell fired him midseason last year while they were together in Detroit.

Sorensen, 42, played 10 years in the NFL for the Dolphins, Rams, Jaguars and Browns. He took his first coaching job with the Seahawks as their secondary coach in 2013 and stayed in Seattle for eight years. 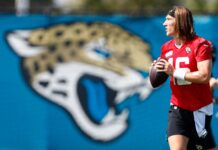