Ian Rapoport of NFL Media reports that the Jaguars will retain Trent Baalke as the team’s general manager, despite firing Urban Meyer midseason. 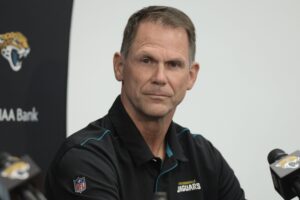 Indications were that Baalke was likely to remain in Jacksonville, so this isn’t a huge surprise.

Baalke, 57, began working for the Jets as a personnel scout in 1998 before joining the Redskins 2001. After four years in Washington, Baalke was hired as the 49ers’ Western region scout and worked his way up to general manager.

Baalke was named Executive of the Year by the Pro Football Writers Association back in 2011 after the team won 13 games. He spent six years in the position but was fired in 2017 after another disappointing season.

The Jaguars hired Baalke in 2020 as their director of pro personnel and eventually promoted him to GM last year.

During his tenure with the 49ers, the team produced a record of 57-31-1, which includes three playoff appearances and a conference title in 2012. The Jaguars are currently 2-13.