The Jaguars announced the signing of third-round pick G Brandon Linder on Monday.

Jacksonville now has only three remaining draft picks to get under contract including QB Blake Bortles, WR Marqise Lee and WR Allen Robinson.

There has already been talk that Linder is in the mix to start for the Jaguars right out of the gate, so it will be interesting to see how he holds up in training camp.

Linder started 42 games for the University of Miami while seeing time at guard and right tackle, so he does offer some versatility. 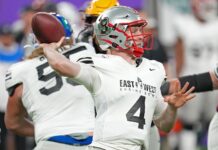