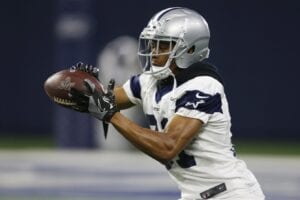 Johnson, 25, wound up going undrafted out of Toledo back in 2019. He later signed a three-year rookie contract with the Cowboys.

However, Dallas waived him a year later and eventually signed him to their practice squad. Dallas brought Johnson back on a futures contract this past January only to waive him back in March he was later claimed by the Jaguars.

During his college career at Toledo, Johnson caught 125 passes for 2,265 yards receiving and 25 touchdowns over the course of five seasons and 45 games.