Of this group, the Jaguars signed Pressley to their practice squad.

Beltre, 26, originally signed on with the Chargers as an undrafted free agent out of Towson back in 2013. He’s lasted just a few months in San Diego before he was waived coming out of the preseason.

The Raiders later signed him to a future/reserve contract after the season but he was cut loose a few weeks after the 2014 draft. Beltre later joined the Calgary Stampeders of the CFL and has spent three seasons in Canada.’

The Jets signed him to a futures deal back in January but waived him three weeks ago.

In total, Beltre has recorded 27 tackles, three sacks and a forced fumble over the course of 26 games. 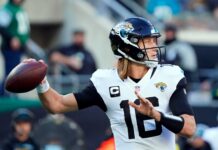