According to Tom Pelissero, Jets DL Quinnen Williams broke a small bone in his foot and will likely need surgery. 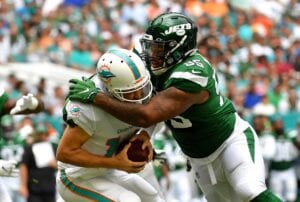 The injury will keep Williams out for the next 8-10 weeks, per Pelissero, which knocks him out for OTAs and minicamp but should allow him to return during training camp.

Mike Garafolo adds the injury happened while Williams was doing on-field work at the Jets’ facility.

In 2020, Williams appeared in 13 games for the Jets and recorded 55 tackles, seven sacks, two forced fumbles and three pass defenses. Pro Football Focus has him rated as the No. 15 interior defender out of 131 qualifying players.