According to Ian Rapoport and Mike Garafolo, the Jets’ plan is for QB Zach Wilson to be reinserted back into the starting lineup at some point. 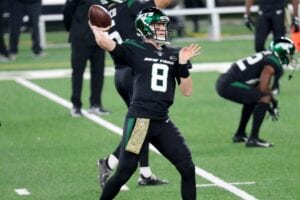 The team didn’t have any details on when that would be, but a source told Rapoport Wilson’s tenure in New York is “definitely not over.”

However, Jonathan Jones reports that if new starting QB Mike White keeps the Jets in playoff contention, the team will ride the hot hand with him. He adds it’s believed the soonest Wilson could return to the lineup barring injury would be Week 15.

For now, Wilson is working as the scout team quarterback in an effort to reset the fundamental parts of his game that had deteriorated to an untenable point.

“We put him behind that offensive line against our starting defensive line with the idea of getting completions, getting connected with your lower half and working on the fundamentals,” Jets HC Robert Saleh said. “There’s an accuracy issue. He’s overthrowing wide-open guys. It’s not about decision-making and ability. He’s making the right reads. It’s more about fundamentals and footwork. He got the chance to work on that last week in practice, especially when things were breaking down in front of him.”

Wilson’s poor play was only part of the equation with the benching, as his comments that avoided accountability after the loss to the Patriots threatened to split the locker room. Jones’ reporting indicated Wilson needed an attitude reset as well but the Jets felt he turned an emotional corner almost immediately, apologizing to each individual defensive player.

Sources told Rapoport and Garafolo that Wilson offered a heartfelt apology to the team this week. Saleh added Wilson’s attitude has not been a problem.

“Zach handled it like a pro,” Saleh said. “He challenged it like anyone would. But at the same time, he had a good week of practice.”

There is some precedent for benching being only temporary, which is what the Jets hope even though it’s undeniably a setback.

“Someone mentioned to me the other day Phil Simms was on and off the bench,” Saleh said. “(Bill) Parcells benches him and he comes back to win his job back and win the Super Bowl. There’s stories like that all over the place. It’s just that quarterbacks don’t have that much time. Coaches don’t have much time. He has tremendous arm talent, works his butt off and is a good decision-maker but he’s not where he needs to be or where he’s gonna be.”

Wilson, 23, was a three-year starter at BYU and a first-team All-Independent League selection as a junior. The Jets drafted Wilson with the No. 2 overall pick in the 2021 draft.

In 2022, Wilson has appeared in seven games for the Jets and completed 55.6 percent of his passes for 1,279 yards, four touchdowns and five interceptions. He also has 94 yards rushing and a touchdown.

We’ll have more on the Jets quarterback situation as the news is available.